Artificial Intelligence interest, investment, and advancement, experienced peaks and troughs since the very first AI breakthroughs emerged in early 1950. Peaks of AI investment and development are called “Summers,” and troughs, where AI investments decreased are called “Winters”. We have experience 3 full cycles of AI Summers and Winters, so far. With more hype and excitement around AI than ever, many wonder “is winter coming?”. The answer is No.

Alan Turing created the “Turing test” in 1950, which could determine whether a computer is capable of thinking like a human being, generating the first artificial intelligence (AI) Summer hype-wave. AI excitement further escalated in the 1980s when systems capable of reproducing human decision making were created. The last AI Summer evolved in the 1990s when Deep Blue, a chess computer developed by IBM, defeated Chess Master Gary Kasparov. Between each of these three peaks were “AI Winters”, between 1974-1980, and 1987-1993, where AI development paused.

Historically speaking, each of the previous AI winters were primarily caused by over-hyping an AI breakthrough such as the Turing Test, new systems, or Deep Blue. Each of these discoveries’ hype generated inflated expectations, which drove a new wave of investment money. However, every AI Summer created a bubble effect, which eventually burst when the pace of AI advancements did not maintain speed with market expectations. Once the bubble burst, AI excitement (really, investment) dries up, sharply curbing AI development productivity, leading to a long winter.

We are now living in a time of unprecedented AI breakthroughs. Computer vision can drive cars, machine learning is used to analyze massive data sets in seconds, and AI is able to beat humans at games like “Go”, which was previously thought impossible. However, even though we are at an AI peak, we do not believe this will lead to an AI winter because machine learning and deep learning have become profitable. AI is now deeply integrated around our content generation and recommendations for social media, shopping, and online entertainment. For business use Artificial Intelligence has become a critical component in medical industries to diagnose cancer. Financial Technology firms use AI to increase efficiencies, and marketing firms leverage AI to better understand their audiences’ preferences and behaviors. Of course, it is no surprise that the companies most using AI to increase the viability of their own businesses are also some of the largest investors in AI. Venture Capital investors increased the annual investment levels for AI startups by six times since the early 2000s. Lastly, with the abundance of computing power and data storage available today through private and public cloud providers, there is no limit to the AI capabilities we can develop.

AI has now reached a pivotal point where it is central to how business is conducted. AI is a strategy imbedded in every aspect of our lives. Due to these tight integrations, the sunshine of the Artificial Intelligence Summer is here to stay.

Modjoul’s origin story is not unlike that of many companies. Long story

We love data at Modjoul. Every day, our team is deep in data analysis as we work to discover better ways for keeping workers safe and reducing risk for companies. 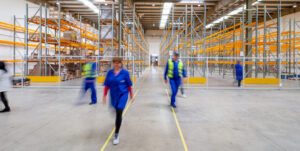 Employee theft plagues workplaces more than you may realize. Here are five